Welcome, LitStackers, to a new month and our old favorite, the Featured Author segment. 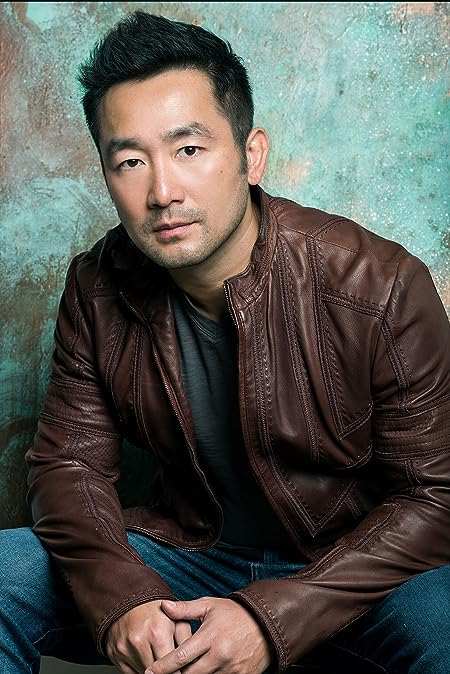 Salvager, The Rise of Io, and The Walking Dead: Typhoon. He won the Astounding Award for Best New Writer. His debut, The Lives of Tao, won the Young Adult Library Services Association Alex Award.

Chu is an accomplished martial artist and a former member of the Screen Actors Guild. He has acted in film and television, worked as a model and stuntman, and summited Kilimanjaro. He currently resides in Los Angeles with his wife, Paula, and two boys, Hunter and River.

We kick off our FA segment of Wesley Chu with his original sci-fic thriller, THE LIVES OF TAO.

THE LIVES OF TAO

When out-of-shape IT technician Roen woke up and started hearing voices in his head, he naturally assumed he was losing it.

He now has a passenger in his brain – an ancient alien life-form called Tao, whose race crash-landed on Earth before the first fish crawled out of the oceans. Now split into two opposing factions – the peace-loving, but under-represented Prophus, and the savage, powerful Genjix – the aliens have been in a state of civil war for centuries. Both sides are searching for a way off-planet, and the Genjix will sacrifice the entire human race, if that’s what it takes.

Meanwhile, Roen is having to train to be the ultimate secret agent. Like that’s going to end up well.

Read an excerpt on Tor.com

The World According to Tao (and Wesley Chu) by Sharon Browning

In traditional Chinese philosophy, the Tao is the intuitive knowing of “life” that cannot be grasped full-heartedly as just a concept but is known nonetheless through actual living experience of one’s everyday being.*

That’s not the Tao I’m talking about.  Not really.

The Tao I’m referring to is an alien being, part of a race of aliens who came to Earth back in the late Mesozoic Era, about 65 million years ago.  One of the central characters of a set of books written by rising star Wesley Chu (The Lives of Tao, The Deaths of Tao, and The Rebirths of Tao), Tao is a Quasing, beings from a far distant world who exist, well, not as energy, but in an incorporeal state, at least as how we understand and perceive it.

Quasings did not come to Earth by choice.  Caught in a meteor shower that damaged their ship’s “cocoon” to the point where regeneration was impossible, their only option was to try landing on the closest inhabitable planet, which just happened to be ours.  However, the atmosphere on Earth was not kind – it petrified the ship’s outer membrane causing it to break into several pieces, killing most of the Quasing and scattering the others across the planet.  According to Tao himself, “The devastation (of the crash) was massive and caused severe climate changes” to the environment.

In other words, the disintegration of the Quasing ship brought about the extinction of the dinosaurs.  And that was just the beginning of their effect on Earth.

The surviving Quasing discovered that they could exist by inhabiting the bodies of the indigenous life forms they came across, in a endosymbiont relationship.  When one host died, the Quasing inhabiting it would move to another host.  As long as a Quasing could find an organic host to inhabit (regardless of intelligence), he or she could live indefinitely; to have a host die without another host being available would kill the Quasing as well, sending its essence to what they call the Eternal Sea.

As the eons passed, the Quasing survived by this transference, ever dreaming of returning home.  As life on Earth became more complex and intelligent, the Quasing began to influence their hosts more aggressively, pushing evolution to a point where couched technology could be harnessed to find their way back to their own kind (although Quasing cannot force a host to do anything; their “voice in my head” influence is one of cooperation – and manipulation – rather than coercion).

After mankind evolved, the Quasing discovered that great conflict often spurred great innovation, and this realization caused a cataclysmic divide in the alien ranks.  Two opposing factions arose:  the Genjix, a warlike, aggressive, and finely focused group, who believe that humans are expendable in the face of achieving their goals, and the Prophus, a more balanced group who feel that it is not their place to put Quasing life above human life, either directly or indirectly, by inciting unwarranted conflict regardless of the advantageous innovations it may spur.

The glorious thing about how author Wesley Chu shares all this information is that he doesn’t hit the reader over the head with it.  Although we learn quickly about the Quasing, it unfolds naturally, with the bulk of the information coming when Tao, a somewhat maverick – and somewhat crotchety – Quasing is forced into a sudden merging with Roen Tan, an unmotivated, underachieving, out-of-shape yet good-natured slob who is in an IT job he loathes but is unwilling to make any significant changes to better himself.  Once the relationship between Roen and Tao has been established, we learn more about the workings of the Quasing not only through the action of the stories but also through little vignettes at the start of each chapter, never more than a paragraph, that not only fill in some historical information about the Quasing and their thought processes but also their hopes and yearnings, both as groups and as individuals.  It almost feels like we are reading Tao’s diary, but one which he expects to be read.

Wesley Chu is a master at this kind of easy-going, intrinsic worldbuilding.  In both the Tao series of books, and in his “Time” series (2015’s Time Salvager and 2016’s Time Siege, with more to come; Time Salvager has been optioned to Paramount Pictures with Michael Bay signed on to direct), he crafts stories that are really “out there”, but in such an accessible way, using easily recognizable – and likable, often laugh-out-loud funny (yet wonderfully flawed) – characters, that we accept them unconditionally, and enjoy where they take us without question.  He doesn’t over-analyze or wastes time on minutia, concentrating instead on the effects of his worlds rather than the explanation behind them.  But they are strong enough and consistent enough – tight enough in their presentation – that we flow right into the storytelling rather than nit-picking over how his worlds might not stand up to scrutiny.  Why worry about scrutinizing something that’s so much fun?

Mr. Chu has another book releasing tomorrow, The Rise of Io, set in the same world as his Tao series but totally separate.  New York Times bestselling author Peter V. Brett says of the new book, “Wesley Chu keeps leveling up.  Storytelling that seems so effortless you never see the punches coming.”  And Hugo, Nebula, and World Fantasy Award-winning author Kenneth Liu states, “I’m in awe of this book.”  My copy (autographed!) should be coming any day now, and I can’t wait to read it.

If you haven’t experienced any of Wesley Chu’s Tao novels yet, I highly recommend you find a copy of The Lives of Tao and get acquainted with Tao, Roen, and all the other wonderful characters in this world-that-just-might-be.  Then be prepared to be thoroughly entertained.

You can thank me later.

* At least according to Wikipedia.