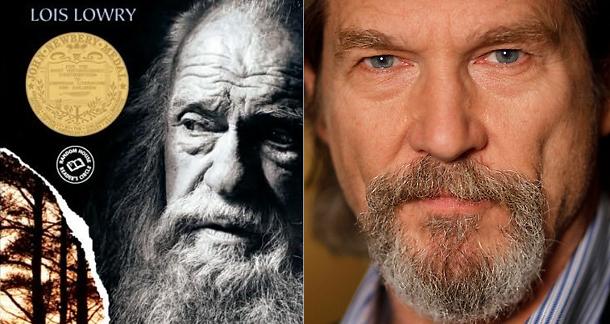 potential franchise to look forward to, and this one sounds promising. Variety’s Jeff Sneider reports that The Weinstein Co. and Walden Media are close to locking down director Phillip Noyce (Salt, Patriot Games, Dead Calm) for a cinematic version of our October Feature Author, Lois Lowry’s 1993 novel, The Giver. Even better, Jeff Bridges is slated to produce the movie (with Nikki Silver) and star in the titular role.

For those of you unfamiliar with the book, Sneider offers a pretty excellent summary:

The Giver is a largely introspective fantasy tale set in a colorless dystopian society in which all memory of human history has been erased, emotion does not exist and citizens’ professions are chosen for them. When a 12-year-old boy is assigned to serve as the Receiver of Memories (i.e. the next Giver) he discovers that all is not as it seems.

Jeff Bridges has championed the adaptation for about two decades now, ever since discovering the source material through his daughter. With fervor for such age-defying properties high right now, it looks like Bridges may finally get his wish.

The Weinstein Company hasn’t confirmed anything yet, though sources close to the project say Noyce has definitely been approached. Early details also indicate Vadim Perelman, who previously adapted Andre Dubus III’s heady novel House of Sand and Fog for the screen, wrote the most recent draft. Since The Giver concerns itself less with physical action, more with intellectual drama, Perelman and Noyce seem like good choices.

On this day, March 8, contemporary romance

author Eden Butler was born in Baton Rouge, Louisiana. Creator of (to name a few) the Serenity, Thin Love, Shadow, Protocol and Carelli Family Saga series (as well as stand-alones such as the paranormal romance Crimson Cove, wacky I’ve Seen You Naked and Didn’t Laugh: A Geeky Love Story, and lovely time-spanning Infinite Us) Eden is the direct descendant of an honest-to-God English pirate, which could explain her affinity for rule breaking and rum. When she’s not writing, Eden patiently waits for her Hogwarts letter, edits, reads and spends way too much time watching rugby, Doctor Who and New Orleans Saints football. HAPPY BIRTHDAY, EDEN! We love you!