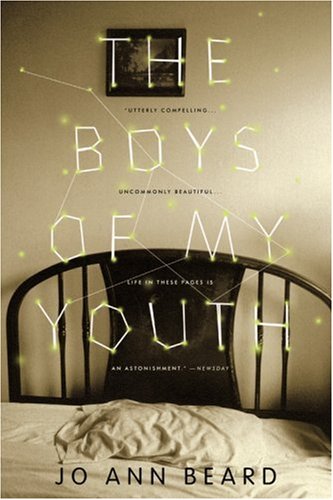 The Boys of My Youth, by Jo Ann Beard

When it was released in 1998, I somehow missed Jo Ann Beard’s debut collection of essays. How I managed that is baffling, but as luck would have it, I recently fell down an Internet rabbit hole and ended up here, at the first publication of her now iconic (and much anthologized) essay, “The Fourth State of Matter.”

It took, oh, maybe the first line or so, to be grateful for accidents of web browsing. This essay, in case you don’t know it, is in part Beard’s account of surviving of the University of Iowa shooting in 1991. At the time, she was working in the physics department and unexpectedly left early that day. But she knew the gunman, and one of the victims, Christoph Goertz, who was a colleague. I can think of few writers able to merge an account of that nightmarish crime with the dark comedy of caring for an aging collie, a marriage on the rocks, and particle physics. Here’s an excerpt:

Christoph Goertz. He’s hip in a professorial, cardigan/jeans kind of way. He’s tall and lanky and white-haired, forty-seven years old, with an elegant trace of accent from his native Germany. He has a great dog, a giant black outlaw named Mica, who runs through the streets of Iowa City at night, inspecting garbage cans. She’s big and friendly but a bad judge of character, and frequently runs right into the arms of the dogcatcher. Chris is always bailing her out.

The Boys of My Youth contains eight essays that read like a memoir. Upon release, Publisher’s Weekly called the collection a “vividly realized collage of episodes,” an effect that arises from Beard’s ability to juxtapose places and times. The missing presence of a grandfather, for example, on visits to her remarried grandmother’s is never directly addressed but wonderfully shown in the young Beard’s attuned sense of change in the familiar house. Or the futile sense of trying to please a perfectionist, her husband. Or the title essay, an epic account that is part a chronicle of divorce, part coming of age in the Seventies, and for this reader, a grand testament to the kinds of long term friendships women have, and the emotional range within them that can range from inane goofiness to fierce, life-saving comradeship.

The tragic Iowa shooting is a one affecting note in a collection that spans octaves. By octaves I mean emotional states, tones, decades, life passages, states of being. Beard’s voice on the page has a wry intimacy that recalls greats like Flannery O’Connor and Bobbie Jo Mason, and it’s no accident I think that Beard, who grew up in the South, has a similar preternatural sense of place, one that can be both incongruous and aligned with the speaker’s experience. If a work of nonfiction does not aim to rely directly on plot or character, as is the case with so many of Beard’s, what gives her essays movement is her ability to show how the self in situations both congruent and incongruent with the world.

In an appreciation of Beard’s collection at the Michigan Quarterly Review, Claire Skinner writes:

“Without the push of plot and character development, what becomes paramount is Beard’s voice, that fingerprint (inimitable, personal) that defines a writer. Voice, of course, is personality on the page: a combination of qualities tangible and intangible, obvious and subtle. Who’s ever fallen in love with an idea? No one. It’s the personality we love.”

Beard’s voice is one I especially love to find in an essay, a tone as full of doubt as it is mettle. You can trust a voice like that. No matter what the subject, the voice makes you believe the essay is one you’ve been waiting to read about.