In 1811, at the age of 19 and in his first year at Oxford, Percy Bysshe Shelley wrote a pamphlet called The Necessity of Atheism. It obviously wouldn’t turn out to be the most

well-known piece of work ever published by, arguably, England’s greatest lyric poet — but when you write that “the mind cannot believe in the existence of a God” and send it to all of your Christian professors and local bishops, somebody might take issue.

After refusing to disown the work, Shelley was promptly expelled from the university, along with his classmate, friend and literary pal, Thomas Jefferson Hogg. Shortly after skipping town, Shelley and Hogg decided to move to London, and they ended up sharing a space at 15 Poland Street in the burgeoning Soho district.

Unlike (or maybe not so unlike) the legacy Soho would gain for a while in the mid-20th century — as an anything-goes town, packed with drunken beat poets and stoned jazz musicians — its atmosphere in Shelley’s time was that of a cosmopolitan hub for religious

refugees, political dissidents and skilled craftsmen from all across Europe. And the young poet and activist loved every second of the freedom he found there.

The friendship between Shelley and Hogg grew even stronger at 15 Poland Street, and that bond, along with his own strong will, probably helped Shelley get over the fact that life in academic exile meant cutting off all ties with his influential father (a member of Parliament). The relationship with Hogg (at the expense of the paternal one) also allowed his spirit as a supreme idealist and individualist to flourish, even as he turned from pamphleteering to poetry. Instead of falling prey to disaster and doubt after dropping out of Oxford, everything was clicking. Shelley’s biographer, John Addington Symonds, wrote that the young man loved Soho so much that he “vowed that he would stay there for ever.”

Well, he didn’t. He eloped with 16-year-old Harriet Westbroke a few months later, and the lovers set off — along with Hogg, of course — for Edinburgh.

So it doesn’t seem like Shelley did much writing in Soho, but, according to the accounts we have of 15 Poland Street, it’s where his will to live an unfettered life quickly matured into something genuinely powerful. And that life wouldn’t be very long (29 years), but, if you’re here, I don’t think I need to tell you why it mattered.

I stopped by Shelley’s old Soho digs the other day to see what’s left of the place. The bad news is that nothing original seems to have remained; the door to 15 Poland Street leads to a couple of offices, and the only official reminder of his presence is one of London’s ubiquitous blue plaques: “Percy Bysshe Shelley, POET, lived here in 1811.”

The good news is that just around the corner from that door, at the intersection of Poland and Noel Streets, painter Louise Vines decided to give the building back to Shelley in 1989.

Her mural, “Ode to the West Wind,” takes direct inspiration from his iconic poem of the same name — and it’s totally gorgeous. The image is more of a free representation of Shelley’s powerful descriptions than a visual retelling of the poem, but it carries the weight of his words with vibrant simplicity.

A single reader sits near a tree that has just split — perhaps to due to the force of the autumn wind — but there is no panic on her face; she lifts her face from the book to look calmly out into the world with an immortal stare. The mural, unlike so many others, doesn’t feature swirls of color or movement. It isn’t based on the frenzy of collage or urban life.

It is an ode. But not to the wind, or the poem, I think; it is an ode to the stuff carried within that wind and those words, the hope of spiritual liberation Shelley sent forth through his pen. And it fits beautifully, because those seeds were never really sown until the poet and his friend made that fateful move to Poland Street. 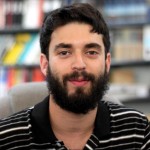 4 thoughts on “Shelley in Soho”