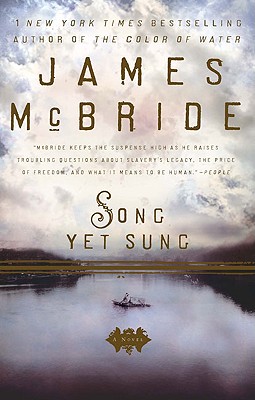 One of my favorite past times is visiting used bookstores where I can often find old favorites or new gems. James McBride’s Song Yet Sung is one of these gems. McBride’s first book, The Color of Water, I greatly enjoyed, so I expected the same from this novel. I was not disappointed.

The novel is not your typical runaway slave narrative. McBride visits the point of view of a number of different characters, all who are involved in the various aspects of the slave trade.  The novel also provides a loving link to history of how the Underground Railroad was run by both slaves and free blacks alike. McBride also throws in social commentary on how African American’s currently live through runaway slave Liz’s visions and her horrified reaction to the images she sees.

McBride clearly did his research on how the Underground Railroad was truly ran, expertly detailed in a chapter titled “Spreading the Word,” where Mary, a slave, spreads word that her brother Amber, is also missing and believed to have runaway. The novel then follows the “message” as it travels through the county, with the white folk none the wiser. The passage was so beautifully written it reads as almost poetry.

Song Yet Sung is among my list of favorite books and one that I would love to use to teach one day.