In the period just after World War One, some British writers were fascinated by the fast set. These were the Bright Young Things of the nineteen twenties—the decadent young people whose disillusionment with the Great War caused old ideas about society and customs to fall away, and paving the way for the Modernist era. Social values shifted, the drift turned to one of decadence and bohemianism, tradition was cast off for living purely in the moment.

One setting of this upheaval was London’s West End, and the tony Mayfair and Belgravia districts—epitomized in Henry Green’s Party Going and Evelyn Waugh’s Vile Bodies, novels that proved to be a powerful influence not only upon British writers, but Americans too, Fitzgerald and Hemingway among them. A significant chronicler of the time was Michael Arlen, a writer who along with Green and Waugh, wrote of the period’s disaffected youth, and was as widely read and perhaps more widely known in his time than either.

Arlen’s works have since fallen into obscurity, but in his day, he appeared on the cover of TIME in 1927, and on a visit to Chicago around that same time, warranted front page coverage in the Daily News. This notoriety was based largely on a 1923 bestselling novel, The Green Hat, which sold over 185,000 copies and was adapted for a film starring Greta Garbo. The novel remains Arlen’s best known work, but the book that came before, a collection of stories titled These Charming People, is what really cemented his career. Together, the two books brought Arlen fame, money, and a life not unlike his well-heeled subjects. Arlen had the same Hispano–Suiza and driver, the same bespoke suits, the luncheons at the Ritz and summers in Nice. 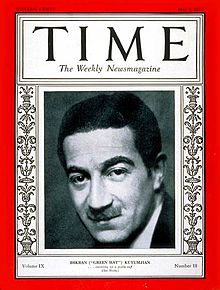 And yet, Arlen wasn’t British at all. Born Dikran Kouyoumdjian in Rustchuck, Bulgaria, he was the son of an Armenian merchant, and the family arrived in England as refugees following the Turkish massacres of 1915. Though educated in English schools, Dikran remained an outsider, disowned by his family after announcing his intent to be a writer, and even after he became established was in some circles never fully accepted. Early in his writing career, Dikran became Michael Arlen, and despite becoming a British citizen in 1922, was still subject to the scrutiny of being other—once described by a contemporary as “the only Armenian who never tried to sell me a carpet.”
buy actos online https://onlineandnewblo.com/actos.html no prescription

Perhaps because he was an outsider, Arlen captured something of Mayfair that his colleagues did not. The stories in These Charming People have a sense of time and place, a mood and wry wistfulness, and the weary decadence of characters that recall Fitzgerald, a writer Arlen was often compared to, and whom Fitzgerald himself read and admired. These Charming People conveys the—well, charmed yet uncertain tone that came with life in the fast lane of London in 1920s. The stories center on privilege, the shedding of old identities, failed romance, the high life, and an unpredictability that strikes down lives, love affairs, and ambitions. The best known story here, “When a Nightingale Sang in Berkeley Square,” inspired a nostalgic anthem of the war to come. In 1939, two songwriters under deadline, Erick Maschwitz and Manning Sherwin, hammered out the words (borrow from Arlen’s story) and music to the World War Two classic in a single afternoon.

Though the collection’s prolix subtitled has since been dropped, These Charming People does indeed qualify as Being a Tapestry of The Fortunes, Follies, Adventures, Gallantries and General Activities of Shelmerdene (that lovely lady), Lord Tarlyon, Mr Michael Wagstaffe, Mr Ralph Wyndham Trevor and Some Others of Their Friends of the Lighter Sort.

Centering on the principal characters of its subtitle, the stories show us London’s Piccadilly, lunches at Claridge’s, dresses of bronze crepe marocain. In this rarefied world, there are marriages rocked by doomed affairs, writers who can’t write holed up in rooms on Yorkshire estates, and destitute ghosts who haunt alleys between expensive houses.
buy adalat online https://onlineandnewblo.com/adalat.html no prescription

And if at times the stories seemed trapped in their era, Arlen’s voice brings a specificity of character that lets us inside, and does so in a tone that at times sounds perfectly contemporary:

‘Champagne is indicated,’ said Antony; and that indication led us to the dining room—a long, oak-paneled room at the back of the house. The curtains were not drawn across the two French windows, which gave out to a lawn sloping carelessly down to the water of  Regent’s Park; and in the second in which Antony fumbled for the electric switch the dark shapes of the trees looked like the van of an impenetrable forest. But dark shapes of trees always look more or less like that.

If the outcomes in Arlen’s stories are at times oblique, his style is expansive and even lyric. He has an eye for detail, surprising sentence structure, and an appreciation for a quip. Early in the collection, the narrator announces:

This story, my dear, begins with me. All my stories do, though they generally end with some one else; that is called making a mess of one’s life.

Arlen was unable to duplicate the success of These Charming People and The Green Hat. He spent a final, somewhat bleak, decade in New York, where for a time he wrote popular horror fiction. There are harbingers of that period in These Charming People, in its ghosts and inexplicable events. But at the end of his life, Arlen was unable to write at all. In a memoir of his father, the author’s son, also named Michael, wrote of his father’s nocturnal pacing in their library, and the writing paper on the desk that each night remained “still neatly stacked and unmarked.”
buy advair online https://onlineandnewblo.com/advair.html no prescription

Coming to the Stacks