I cut out the obvious ones that I thought others will definitely list, like To Kill a 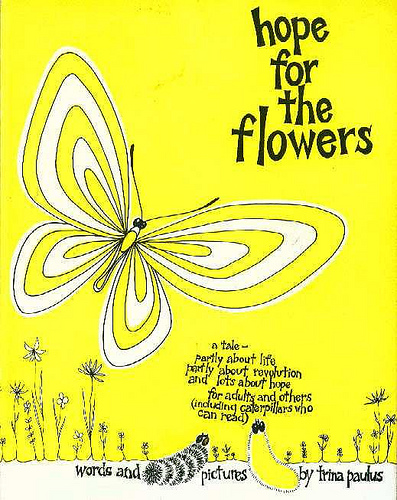 Mockingbird by Harper Lee or Wicked by Gregory Maguire, as well as those titles I have an inkling someone can’t resist, such as Housekeeping by Marilynne Robinson. Instead, I went with books that are perhaps a bit unique to me.  They are in no particular order.

1)  Hope for the Flowers by Trina Paulus

In high school, I read this book and loved it so much. It changed my young life and beliefs which so often are assumed of young people to desire and set goals toward. My friend and I taught a class at a youth retreat where I rewrote the entire thing as a stage play and our class was to perform it; I spent HOURS toiling over that play and yet was more concerned to spread the word than if we actually got to perform it.  There is just something about this caterpillar allegory–climbing to the top vs. flying, and the struggle involved.

2) Walk Two Moons by Sharon Creech  [Runner up: The Pigman by Paul Zindel]

In my early college days, I was suggested by a friend to read this. (Not really coincidentally the same one seen in pick #1.)  I spent many days afterward contemplating figuratively walking around in the shoes of others. What was their life like? Is that why they are as they are? What has happened in their journey to become who they are today? From my favorite genre, this young adult fiction novel helped me in a new place with new faces.

As far as I know, this was the first book written for adults by Pike. Most know him for his horror/thrillers for young adults, but I remember him mostly for this book. Sati is a new way to look at life through a fictional story of a deity come to Earth.  Sati’s name could come from the Hindu goddess, as there are many teachings woven into her tale. At the same time, there are bits which remind me of the stories pertaining to Jesus from the Bible–but changed in a way. When I first read this book, it changed my thoughts and beliefs. While it wasn’t that it was spectacular, it was the first book that I personally read which opened my eyes to alternatives for a spiritual life.

This collection of short stories is Vonnegut at his best, in my opinion.  The one about the future and overpopulation was especially memorable to me: because I could see it both from the family whose tale we read and from the realistic potential of too many folks longer and longer. The range of these stories show Vonnegut’s creativity with science fiction and humanity.

This one I decided to make the list because it is the most recent one that struck a chord with my heart. The messages that project through the characters and their friendship, love, and sacrifice for one another wouldn’t be ignored. There’s a bit of supernatural (I’d say magic, but it wasn’t positive with fairies or conducted by a witch) and that pulled me in but Brewster and his amazing personality kept me there.  Shusterman always has interesting takes on society and ‘what if’ situations; his Unwind series is also evidence of that.

One thought on “LitStaff Pick: Our Favorite Top Five Must Reads”

On this day, June 23, in 1975, Markus Zusak was born in Sydney, Australia, the youngest child of a mother from Germany and a father from Austria. He has so far written six novels, many of which have won numerous awards, but he is best known for his 2005 work The Book Thief, set in Nazi Germany. That work became an international bestseller and was translated into 63 languages, selling over 16 million copies. It was adapted into a 2013 feature film of the same name starring Geoffrey Rush and Emily Watson. Markus’ latest work is Bridge of Clay, was published in 2018. Today, he turns 46.