And There was Evening And There Was Morning, Essays on Illness, Loss, and Love,
by Mike Smith (WTAW Press)

“Mourning,” Hilary Mantel wrote, “is work. It is not simply being sad. It is naming your pain. It is witnessing the sorrow of others, drawing out the shape of loss.” Who among us, when grieving, is willing to examine those contours and shadows? We’re more likely to seek comfort, to use memory as a form of solace rather than investigation. In his nonfiction debut, And There Was Evening And There Was Morning from WTAW Press (September 2017), poet Mike Smith undertakes the work Mantel describes, bearing witness to sorrow and drawing the shape of an unimaginable loss. The memoir-in-essays centers on his late wife, Emily Arndt, who at age thirty-six, three weeks after the birth of their second child, was diagnosed with Stage IV breast cancer, and died four months later.

These fifteen essays, as the book’s subtitle tells us, chronicle illness, loss, and love, but

also look at family, place, spiritual thought, and the sustenance of faith. When the diagnosis came, Arndt had just completed her first year as an assistant professor of Theology at Georgetown University, and completed her first book—Demanding Our Attention: The Hebrew Bible as a Source for Christian Ethics—though its publication would come almost four years later. In his grief, Smith questions almost everything, including his faith, and in the course of his inquiry frequently refers to her rich ideas and insights.

Smith retraces Arndt’s life and work, and his role as her husband, caregiver, and champion. We learn of the couple’s relationship, from their meeting as co-workers in a Washington, D.C. bookstore, to marriage, children, and their life as writers, spent teaching, reading, and writing. We follow Emily’s diagnosis, treatment, and the emotional roller coaster of the good and bad days to the terrible final weeks. Yet the memoir is also about hope and survival, as Smith, with his two children (Virginia, five years old, and newborn Langston), finds ways to move forward. Central to this is his remarriage to Jennifer, a recently-divorced mother of three, who when first hearing of Smith’s situation, offers Virginia a standing play date with her youngest, William.

The memoir opens with the essay, “My Emilys” a reference to both Emily Arndt, and a second Emily. Smith is now remarried, and the blended family has relocated to Mississippi where he’s teaching at Delta State University. Jennifer’s middle daughter, eleven year old Emily, has  been hospitalized for mononucleosis, and an ultrasound has revealed ovarian cancer. Smith has said the genesis of the book began with his stepdaughter’s diagnosis, the same day a just-published copy of Arndt’s book unexpectedly arrived in the mail:

One of the central motifs of my memoir is that my first wife’s book became for me, in the turmoil and trauma of my blended family’s difficult first year, a guidebook and abiding source of solace. 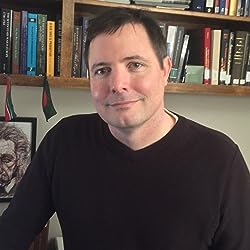 Smith, who currently directs the Honors Program at Delta State, is a poet and translator whose previous books include the poetry collections Byron and Baghdad and Multiverse (BlazeVox Books), and a translation of the first part of Goethe’s Faust (Shearsman Books 2012). And There Was Evening And There Was Morning is his first work of prose—and one of WTAW Press’ first two inaugural books.

“This gravity of grief still pulls at me, as if I might swallow myself,” he writes, and one of the feats of this collection is its tone, which is both questioning and candid. The narrator’s voice moves between intimacy and objectivity, as in the portrayal of Virginia’s first day of kindergarten. Her mother has been hospitalized for the first time since the diagnosis, and before going to school, poses for a photograph, her hands “clasped in front of her as if she were a care-worn grandmother.”

In that essay, “Whispers of Gratitude and Praise,” Smith retraces Arndt’s final days, and the days that follow, as he moves through the rituals of mourning. He writes notes to friends and family who helped during Emily’s illness and death. He reads books on grief, well-intentioned gifts from friends he refers to as “litanies of bereavement,” such as Joan Didion’s Year of Magical Thinking and an anthology of Japanese death poetry. Later, of those books Smith writes, “I couldn’t read them all, but kept them anyway. Even now, I’ll come upon one while scanning a shelf and my mind will snap back to the time I received it. Time travel of a sort: for an instant, I am completely there, returning to the smells, discomforts, and the hold tugging hollowness in my belly of those moments.”

The anger that surfaces is similarly observed, and one morning in the final weeks of Emily’s life, becomes an incident of self-punishment: “I couldn’t keep my eyes open, couldn’t string a sentence together, even after a cold shower, and so I gave myself a little slap on the cheek as I stood at the mirror, shaving. Then I slapped myself again. Though I was alone in the apartment, I closed the bathroom door. The slaps became punches until the pain woke me to my life.”

In these essays, as with many great examples of the form, Smith constructs his arguments from what at first seem diverse points, but as the details begin to connect, they unify in a fresh and personal way. In “Pigeons and Turtledoves,” Smith looks at Emily’s scholarly work, and the role of religion in their lives. He begins with the spiritual quest of one Fritz Eichenberg, a graphic artist and illustrator who came to the US fleeing Nazi Germany in World War Two, and Arndt’s interest in the application of ancient thought to contemporary life. He describes his promise, made during Emily’s illness, to convert to Catholicism. Yet the surgeries and setbacks take their toll, and the promise becomes complicated by spiritual doubt and despair, as here, in a waiting room at the hospital. Emily’s surgery becomes unexpectedly lengthy, and increasingly anxious, Smith undergoes an episode of heightened sensation:

I watched the minutes tick by, unable even to decipher the words of the book on my lap, trying to fight the rising feeling that something was wrong. Just as I felt my hysteria was becoming physiological, my body suddenly relaxed. I felt I was becoming a part of my surroundings. The cool plastic of the chair’s arm became my own, the hard wall behind my head received me as easily as if it were a soft, pliant pillow. Immediately, I sensed Emily beside me. I smelled her, felt her warmth, and I lost track of time.

In “Hours of Lead,” Smith details Emily’s chemotherapy, and her stays between the hospital and home. He is simultaneously caring for their children, maintaining a weekly teaching schedule, running the household, and managing Emily’s care. The sole concession for help he allows is letting his parents take the family dog. “I tried to convince myself that I could do this indefinitely, live this new life that drove home so convincingly what a privileged life I’d led before. Let me do this forever, I prayed. Let this be the penance for my ignorance.”

As Smith begins a new life in his second marriage, he finds that grief returns at unexpected moments. His teaching year ends a month before his family’s, and he uses the time to write at home—yet he’s often inclined to spend the days in “a private ritual,” touring the rooms of the house, taking emotional inventory of the spaces where there is evidence of the present and the past. That essay, “Claiming Space,” brings home the tensions and the persistence of grief, especially as it resides in objects that evoke other places, and other times.

Hallowed ground,” Smith writes. “Will I find it in the actual places of Emily’s past or the things that survive to give these new spaces contour and color”

For Virginia, whose grief for the mother she’s lost is one of the book’s more heart-rending portrayals, a role in a school production of Thornton Wilder’s Our Town becomes the means, at age eleven, for her own contemplation of loss. Reading the script, she comes across the Stage Manager’s line, “…the dead don’t stay interested in us living people for very long. Gradually, gradually, they lose hold of the earth,” an idea that contradicts Smith’s carefully chosen assurances. In the weeks before the performance, Virginia is despondent, but on December 1, the anniversary of her mother’s death, Smith takes her out for fried ice cream. “Working through grief is lonely work,” he writes, “even if your closest are grieving also. I don’t think the fried ice cream helped, but eventually Virginia became again her usual indomitable self.”

A similar hopefulness runs in “There We Are.” After Emily’s death, as Smith relocates to Raleigh, North Carolina, to be nearer to family, he often feels “more borne by life than bearing it.” A year later, he meets Jennifer, and their friendship develops and later turns to courtship. When his teaching position at Delta State comes through, the couple’s way forward becomes clear. Jennifer readies her house for sale, and one day, the children help pull weeds on the brick patio. Smith describes the scene as “two families broken apart, working hard at becoming something new and whole”:

The work was hard and gritty, smack dab in the middle of summer. Though it was late, the bricks were still warm from the sun and the dirt packed and dry…the hose and water brightened everything it hit, the bricks, the dirt, and, inevitably, our seven glistening selves.

Of Smith’s memoir, poet Tony D’Souza said, “The book is a stunned, out of body experience,” and of the author, “Smith, a reflective and precise writer, invites us to walk each step with him as his heart is annihilated by the sort of tragedy we beg, beg God will never come our way.” Mike Smith’s precise drawing of mourning, and love, make this an essential read, a work of solace and a testament to both darkness and light.

Announcing the Winners of the 2022 World Fantasy Awards