In 2002, Rory Stewart made a walk across Afghanistan from Herat to Kabul. A scholar of Afghan history and language, he was well grounded the country’s ancient history, and in the grave first years after 9/11, sought to learn “what [Afghanistan] was like now.”  Part memoir, part political and cultural history, Stewart (currently a MP in Britain’s House of Commons—and famously the youngest elected to date), was fluent in the language, and shape shifting enough in his appearance, to pass as Afghani, or as The Guardian phrased it, “travelling in disguise through places famous for killing infidels.”

Stewart’s journey retraced an ancient trek made at the start of the sixteenth century by Barbur, First Emperor of Mughal India. As Stewart writes, Herat was one of the most civilized cities in the Islamic World, and at age twenty-two, Barbur was the prince of a poor kingdom in Uzbekistan. He set out to conquer Kabul, and subsequently “pressed on east to conquer Delhi and found the Mughal Dynasty.” Though in the process of going by foot over passes buried under ten feet of s 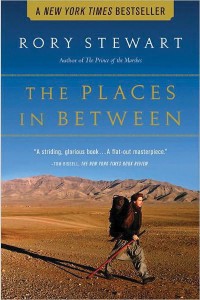 Stewart’s walk took place soon after the Taliban takeover of the country—and the American military invasion. Beyond the obvious personal risk is the uncertainty of travel by foot—weather, sufficient food, water, shelter. In the course of the journey, Stewart is put up in huts, palaces and abandoned castles, fed sumptuous meals and some that are questionable. He’s given aid by warlords and village headmen, though his only constant protection is a walking staff with a metal tip. Early on, he comes into possession of giant Mastiff, and names him Barbur. The dog proves to be protection, but mostly a comfort and a complication—given the animal’s changeable attitude about long-distance walks.

Stewart’s account is part rumination and reflection, as here, as the recent war puts him in mind of a more familiar landscape “defined by acts of violence and death”:

Places in the Scottish Highlands are also remembered for acts of violence: the spot where Stewart of Ardvorlich shot a MacDonald raider, or where the MacGregors decapitated Ardvorlich’s brother-in-law. Around my house in Scotland the Gaelic place-names record death: “Place of Mourning” or “Field of Weeping.” But here the events recorded were only months old.

In the end, The Places In-Between is a personal story, a chronicle of a worldly exploration whose effect, in the end, is powerfully intimate.