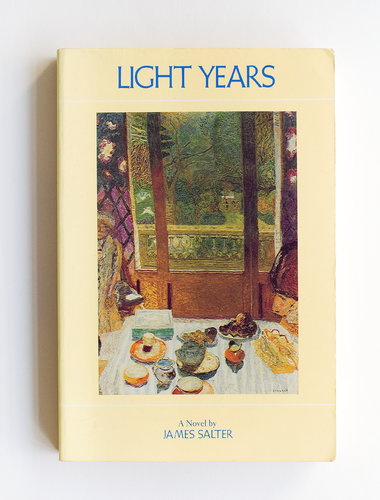 First published in 1975, this novel is considered among the most enduring of Salter’s novels. Known for the beauty of his sentences, ones that Jhumpa Lahiri called “so precise, so clean, so fervent and yet so calm,” Salter is the kind of writer whose prose is singular and satisfying to the degree that it can become addictive.

Of Salter, Nick Paumgarten wrote in the New Yorker:

Among many writers, and some literary people, James Salter is venerated for his sentence-making, his observational powers, his depictions of sex and valor, and a pair of novels that, in spite of thin sales and obscure subject matter, have more than a puncher’s chance at permanence.

Light Years, his second novel (the first, A Sport and a Pastime, was published in 1967 and a third, All That Is, was released last year), centers on the marriage of Nedra and Viri, a well-educated and chic couple who live in a ranging house by the river outside of New York City. Viri is architect and Nedra a glamorous, intense woman, a wife and mother who is creative and inspired—she makes handmade decorations for her children’s birthdays and beautiful dinner parties for their friends. As captivating as their charmed life seems, the book is, in a way, about unhappiness. For Nedra and Viri, this brand of unhappiness isn’t apparent until it dismantles the time and place of their lives. As it unfolds, Salter takes his time to show what Nedra and Viri share: their children, their house, the changing seasons, the chickens in the greenhouse, the dog, the snow, the parties and the long conversations over drinks or dinner. And eventually, he exposes the deep and contradictory yearnings of love and attachment.

1 thought on “LitStack Recs: Light Years and The Mists of Avalon”