Bartleby, the Scrivener, by Herman Melville 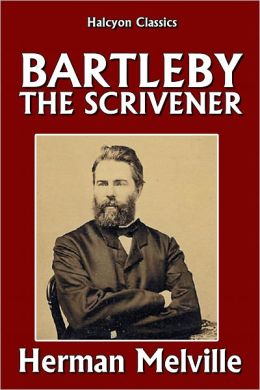 Overworked employees, endless legal documents to be copied, the futility of dead letters—it’s no wonder Bartleby, Melville’s titular anti-hero is in a bad way. Whether he’s mad or not depends on who you ask, though in Melville’s world, the law copyist, or scrivener, who goes on strike while refusing to leave his office is probably the sanest one on staff.

“Bartleby, the Scrivener: A Story of Wall Street” was published in 1853, as a serial in two installments in Putnam’s Magazine. The reviews were unremarkable, yet just as Moby Dick has become a icon of American literature, so has Melville’s story become an important part of the Melville canon. Bartleby is now considered Melville’s best-known work of short fiction, one that nearly a century later, proved a formative influence on writers of absurdist and existentialist fiction. A 19th century story, written before the Civil War, its subtitle “A Story of Wall-Street,” puts Melville’s intention in clearer light. Through Bartleby, he means to tell us a story about writers, but also about work: the inequities of the workplace, of wage earners and bosses, and the power struggle ingrained in the structure.

For the unnamed, elderly barrister who hires Bartleby, things start out optimistically enough. Bartleby seems an ideal contrast to the present intoxicated and cranky staff two-person staff. But in this story there is no satisfaction in work—not in this kind anyway. Of the job description, and his newest employee, the barrister observes:

It is a very dull, wearisome, and lethargic affair…I can readily imagine that, to some sanguine temperament, it would be altogether intolerable. For example, I cannot credit that the mettlesome poet Byron would have contentedly sat down with Bartleby to examine a law document of, say five hundred pages, closely written in crimpy hand.

And then there’s the task of sorting dead letters:

Conceive a man by nature and misfortune prone to a pallid hopelessness, can any business seem more fitted to heighten it than that of continually handling these dead letters and assorting them for the flames? For by the cart-load they are annually burned. Sometimes from out the folded paper the pale clerk takes a ring:—the finger it was meant for, perhaps, moulders in the grave; a bank-note sent in swiftest charity:—he whom it would relieve, nor eats nor hungers any more; pardon for those who died despairing; hope for those who died unhoping; good tidings for those who died stifled by unrelieved calamities. On errands of life, these letters speed to death.

On Bartleby’s third day on the job, he suddenly refuses work altogether, making the now-classic rejoinder, “I would prefer not to.” He takes refuge in his office carrel where he remains unavailable for comment and refuses to leave. After numerous attempts to lure him out (“Nothing so aggravates an earnest person as a passive resistance”) the exasperated barrister brings in the police. Bartleby is arrested, charged with vagrancy and sent to The Tombs, where he then refuses to eat.

In “Bartleby,” Melville was said to have found an affinity in a character “who obstinately refuses to go on doing the sort of writing demanded of him.” Maybe the lukewarm reviews the author received for Moby Dick, published two years before, triggered the bleak outlook. For a writer as good as Melville, a writer who was unappreciated in his time, yet lived and wrote in one of the country’s most momentous eras, what better subject than a doomed scrivener, what better projection for dread and discontent? In Bartleby, the writer who despairs over his plight of mindless copying, brings to mind a quip by Truman Capote, a critique of an author’s work he didn’t love: ”This isn’t writing, it’s typing.”

It’s no wonder Bartleby went mad. For a writer, the bleakest thing next to the despair of your own inadequate words would be having to endless type ones that mean nothing to you—an eternity in boilerplate.