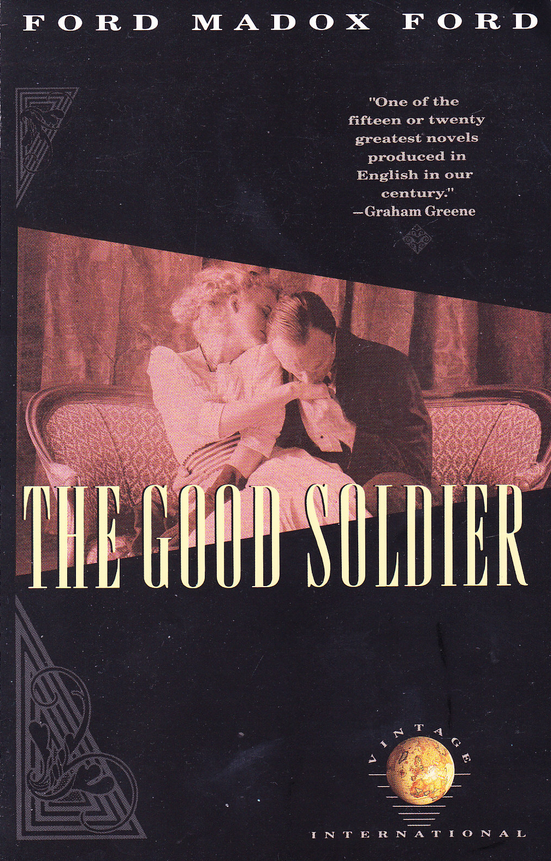 If this novel had been published under the title the author selected, The Saddest Story, contemporary readers might have had a difficult time locating a copy. Fortunately, Ford Madox Ford agreed to his publisher’s title suggestion of The Good Soldier, and with that, the now-classic post-World War I novel of malaise and moral questioning came to be.

Published in 1915, the novel concerns two couples, one American and one English. On holiday in Europe in the summer of 1904, two well-off Americans, John and Florence Dowell, meet Captain Edward Ashburnham and his wife, Leonora, in Nauheim, Germany. John Dowell, the novel’s narrator, relates the story retrospectively, beginning at the famous first line, “This is the saddest story I’ve ever heard,” and a sad story it is, centering on serial infidelity, madness, and suicide. At a spa in Nauheim, Edward is being treated for what he claims is a heart ailment (“too much hard sportsmanship in his youth”). One afternoon, the couples go on an outing to see the museum of Protestant founder Martin Luther. Soon after, Florence and Edward begin an affair, though as Dowell explains, Florence’s aim, “to educate the whole lot of us,” soon meets with Leonora’s Catholicism—a factor that prevents a divorce from Edward.
buy zofran online https://buywithoutprescriptionrxonline.com/zofran.html no prescription

The Good Soldier is built around more than one love triangle. Edward Ashburnham is unhappy in his arranged marriage with the strong-willed and strictly Catholic Leonora (they have not spoken to other in private for thirteen years). He is in fact a serial seducer, and Dowell’s story relates several affairs between Edward and vulnerable young women. Then there is Nancy Dufford, Leonora’s ward, whose liaison with Edward complicates an already-complex situation, since by then she’s been noticed by Dowell too: “She had a tortured mouth, agonised eyes, and a quite extraordinary sense of fun.”

In his role as narrator, Dowell’s voice has an uncertain tone, but it’s balanced by an instinct to explore, to revisit, and reconsider events—beginning with Florence’s affair with Edward, along with those that lead up to it, and those that follow. As Jane Smiley writes of Dowell’s voice, he “freely offers his own self-doubts about his competence, both as an actor in the drama and as an interpreter, and he manages not to seem either untruthful or self-serving.” Dowell’s disclosures and opinions have an insight tinged by doubt, a quality that recalls another narrator by another Ford, Richard Ford’s Frank Bascom. Like John Dowell, Bascom has a disarming forthrightness that turns unreliable. The pieces never quite add up, and it forms a quality that makes a character unforgettable.

The Good Soldier is filled with bad hearts, weak hearts, hearts that are damaged, literally and figuratively. Florence feigns a bad heart to conduct an affair stateside with a dubious character named Jimmie, and commits suicide when she learns that Edward has begun an affair with Nancy. No one, in this novel, comes near to what they want, and if they do, there is disappointment, and circumstances shift the driving hopes. Near the book’s conclusion, Dowell poses a question central to the characters and their story:

Why can’t people have what they want? The things were all there to content everybody; yet everybody has the wrong thing.

In the end, Edward and Nancy are driven apart, though I’m not giving anything away, since plot isn’t the point of the book. The Good Soldier is widely considered to be the first modern novel, in its non-linear telling and subject of unraveling marriages. Events are presented, then circle back to be shown again with deepening layers of complexity. The modernity of the novel is in its form, and in its portrayal of collapse—between people, of customs and religion, and of the self in the aftermath of a brutal war, one that dismantles long held societal roles. The Good Soldier is a kind of anti-love story in which its characters, for reasons that run from madness to weakness to stringent piety, are denied love.
buy zoloft online https://buywithoutprescriptionrxonline.com/zoloft.html no prescription

As Leonora says after the fateful outing to Nauheim: “Oh, where are all the bright, happy, innocent beings in the world? Where’s happiness? One reads of it in books!”

On this day, April 12, in 1916, children’s fiction author Beverly Cleary was born in McMinnville, Oregon. The creator of such kid lit familiars as Henry Higgins and Ramona Quimby, she struggled with reading as a child; it was a school librarian who helped her discover a love of reading and even encouraged the young girl to become a writer. She became a children’s librarian herself, and started writing her own books in an effort to create stories that children could relate to. Winner of a Newbery Medal, a National Book Award, and recognized as a Living Legend by the Library of Congress (just a few of the accolades she has received), we unfortunately lost her just a few weeks ago, at age 104.