The Films in My Life, by Francois Truffaut

The revered French filmmaker, who would have been eighty-six this year, is the subject of numerous books that cover his life and work, and we are lucky that Truffaut was also a prolific critic who wrote scores of essays. One of the founders of the French new wave, he broke cinematic ground with personal films like The 400 Blows, Jules and Jim, Stolen Kisses, Day for Night, and The Story of Adele H. He remained throughout his life a dedicated moviegoer and a clear-headed voice about what made a movie great. Truffaut understood the spectrum of filmmaking as few directors have, as an auteur, but as an actor, too, who played the central role in Steven Spielberg’s 1978 film, Close Encounters of the Third Kind. The Films in My Life, first published in 1975, contains essays that encompass the history of film and the directors who served as Truffaut’s teachers and inspiration: Hitchcock, Welles, Chaplin, Renoir, Cocteau, Bergman, and Buñuel.

Among the essays is a look at a film readers of a certain age are sure to have seen, Albert Lamoirsse’s The Red Balloon (1956). It’s the story of a “magical” balloon that anthropomorphically finds a boy and follows him through the streets of Paris. It’s a popular classic, but in fact is one of the films Truffaut likes less:

When Walt Disney bestowed human speech and reactions on animals, he cheated the animals and the human beings as well…Le Ballon Rouge pushes transference to its ultimate. The red balloon that willingly follows the little boy acts like a puppy that acts like a human being. This is Walt Disney to the nth degree. What is wrong with this pretense is precisely that it is artificial, and it sinks deeper into the conceit as the film goes on. 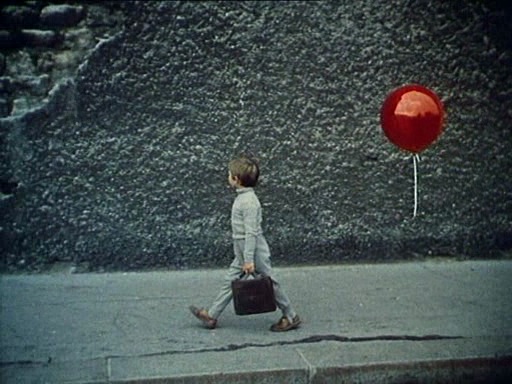 The artifice and its limited expressive reach illustrates Truffaut’s commitment to his realist roots. Among the pleasures of these more than one hundred essays, all selected by the author, is to read Truffaut’s response to the influences within the history of cinema, not just in French and American examples, but internationally. Here’s a 1973 impression on the premiere of Ingmar Bergman’s Cries and Whispers:

There are Bergman “periods.” The present period is more physical than metaphysical. The strange title Cries and Whispers stays with you as you come away from watching the film, having been cried to and whispered to.

You can read this collection, to get inside the mind of one of the 20th century’s most brilliant directors, and for gems like his essay on Humphrey Bogart, written in 1958, or his appreciation of the anarchic surrealist, Luis Buñuel. In Buñuel, Truffaut finds an exemplar of what it means to make films:

The discipline of film has its own rules, which have not yet been fully explored, and it is only through works such as those of Buñuel and the other great director-writers that we will one day realize them fully.

Meanwhile, if your French is not too rusty, check out this undated (circa 1960), untranslated interview with Truffaut, here.