The Marriage Plot, by Jeffery Eugenides 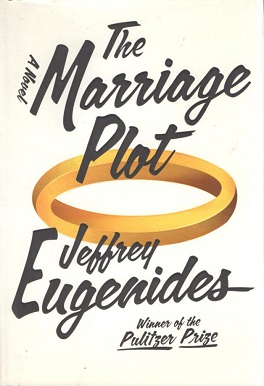 “Heartbreak is funny to everyone but the heartbroken.” That ironic reflection comes early the Jeffrey Eugenides’ lively 2011 novel. The observation is made by Madeleine Hanna, one of three central characters, all of whom are students at Brown University. We meet them on the morning of graduation in 1982, liberal arts undergrads about to enter the post-grad world.

Eugenides, himself a graduate of Brown, won the Pulitzer Prize for his second novel, Middlesex, and is also the author of a debut novel, The Virgin Suicides, which was made into an eerie film, an ironic seventies set piece by Sofia Coppola.

The titular term refers to the novelistic tradition in which a story ends in matrimony, a happy plot reversal after lengthy obstacles of (typically) misunderstanding, separation, and interlopers. It’s a trope that’s ingrained in western literature—think Austen, Eliot, the Bronte sisters—and a plot device that, in the 20th century, migrated to film, defined by those proverbial kisses at the close of a film.

At the center of The Marriage Plot is the romantic triad of Madeleine, Mitchell Grammaticus, the wayward philosophy major, and Leonard Bankhead, brilliant but troubled biology brainiac. The two suitors are opposites of temperament and style. And Madeleine, with her love for Victoriana and nineteenth century novels, is a foil to them both. All three are romantics, but how and why they seek the intensity of romance makes for the novel’s addictive character driven story.

Eugenides’ prose dances along doing amazing things that seem contrary in the same line of prose: it provides entertaining, intelligent reading while revealing the deeper truths of its characters. Really, this book has it all. Plot, character, insight, books, love, loss, eighties music. And woven into it all is the motif of Roland Barthes’ A Lover’s Discourse, that classic of eighties academia (I dug out my copy and took a sentimental journey through the highlighted sections). There is a richness to The Marriage Plot, not only in its meta-layering of books about books, and love about love, but of the gentle conceit that love, though well portrayed in books, is difficult to capture with any clarity in real life.

On this day, October 30, in 1885, poet Ezra Pound was born in Hailey, Idaho. As a young child, he already knew he was destined to be a poet; he attended university at age 15 and moved overseas at age 23. While in London and Paris he was editor of multiple literary magazines, championing the careers of such notables as T.S. Eliot, James Joyce, Robert Frost and Ernest Hemingway. His poetry promoted a modernist aesthetic, focusing on clarity and simplicity rather than flowery language and superlatives. A complicated man (he was charged with treason in the US, and spent 12 years confined to a mental hospital), he died in 1972 in Venice at the age of 87.