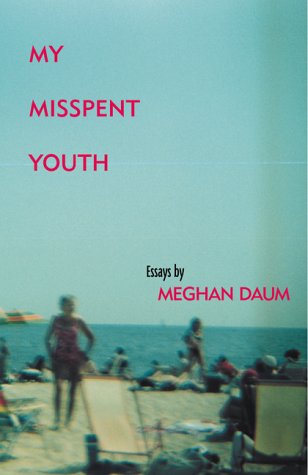 My introduction to Daum and her essays was Life Would Be Perfect If I Lived In That House, her account of wanting, finding, losing and finding the ideal home. In a way, it’s a memoir of coming into one’s own in the context of money matters—real estate, mortgages, income and outgo. My Misspent Youth preceded that chronicle, but lays a groundwork for the hurdles to come in essays that contain what Ira Glass called “a clarity and intensity that just makes you feel awake.”

The title essay, which first appeared in the New Yorker, centers not on the coming of age follies of a Daum’s youth, but the realities that plague her when she finally arrives in the Shangri-La of her imagination, Manhattan. The thrill of arrival and personal edification in living in a place you’ve always dreamed of is covered in LWBPIILITH. Here, the focus is less on the ineffable pull of certain domiciles and more on the literal meaning of the title: the level of debt the author accrues working a low paying editorial job and living in New York City.

If there is a line of demarcation in this story, a single moment where I crossed the boundary between debtlessness and total financial mayhem, it’s the first dollar that I put toward achieving a life that had less to with overt wealth than with what I perceived as intellectual New York bohemianism…And even though I was having a great time and becoming a better writer, the truth was that the year I entered graduate school was the year I stopped making decisions that were appropriate for my situation and began making a rich person’s decisions.

That kind of self-diagnosis, its clarity and objectivity, is what gives Daum’s essays their addictive quality. Her sentences and paragraphs are well organized and go down easily, and if there are emotional anchors she misses, you don’t mind. You might find yourself asking, “But why the pull to the trappings of a rich person?” but before you know it, Daum’s irresistible voice has pulled you back.

The voice too, is so intimate, it’s a surprise when the time-bound details suddenly come up. The collection was released in 2001, and an essay like “On the Fringes of the Physical World,” about the email and chat based “courtship” between Daum and a fan (who calls himself PFSlider), that takes place via AOL seems almost quaint now. Still relevant though, given the prevalence of online dating sites, is the strange and courtly aura that distinguishes a lively ream of banter via text or email. That’s still real, as is the ultimate disappointment that often comes when the chats are better than the real thing.

Most powerful is “Variations on Grief,” the account of a friend who dies suddenly from a deadly airborne hantavirus, one he contracted simply by walking down the street in Manhattan. Brian is his name, he is Daum’s “oldest friend,” and the way in which she manages, with utter empathy to both rail against the brief life he lived and at the same time mourn it, is stunning. That tonal range, moving between characterizing his life as “a string of failures,” and “unremarkable,” a life too-coddled by his wealthy parents, is sharply contrasted with Daum’s sense of culpability—in not caring enough, being a good enough friend, and in the complications that follow his death. The account takes place in the pre-9/11 era, and  absent of that larger, but in the same way, senseless and sudden, the missing context is stark. And yet, the account, which is more about Daum’s failure as a person as it is the untimely death, grows even more tragic as she, in turn, coddles Brian’s grieving father (who constantly asks her about his son) by making up memories. For this reader, that contradictory state, so like the chaos and irrationality of grief, transforms the surface concerns of money and lifestyle by throwing them up against a bleak reality of mortality, guilt and self-delusion—the stricken parents’ and Daum’s own.