Thunderstruck & Other Stories, by Elizabeth McCracken

Early on in Elizabeth McCracken’s extraordinary story collection, Thunderstruck, a grieving mother instructs her seventeen year-old son to seal up the room of his dead sister. This, she imagines will somehow purge the house of the evil that caused her daughter’s lymphoma. “Don’t touch a thing. Just seal it up. He nailed over the doorway with barrier cloth, then painted over that with latex paint.” The image of the little girl’s room, sealed with something as ordinary as barrier cloth and paint, is more haunting than the ghost in “Something Amazing,” the collection’s first story. But in fiction, the most ordinary things can be the strangest: a rental that comes furnished with other people’s worn out, sad objects; parents who’ve failed their son and fill the house with pets; a young girl whose indulgent grandmother is the reason she’s bursting out of her Patrick Henry costume on the Fourth of July—yet whose reasoned view of the world is sure to see her through what will prove to be a life-changing summer. 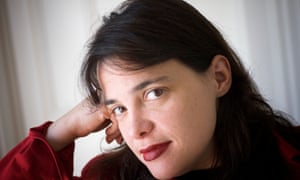 This collection. McCracken’s second, and her fifth book, has so many unexpected moments, so many affecting images, like the sealed room, and so many perfect lines, I’m tempted to finish this post off with a simple list for your reading pleasure. In the tradition of contemporary American story writers like Tobias Wolff, Deborah Eisenberg, Alan Gurganus, Lorrie Moore, Charles Baxter, and Antonya Nelson—McCracken’s world doesn’t belong solely to her character’s. It’s her’s too, in the brilliant detail, the unexpected asides, the fresh, untrod territory of detail, setting, and characters. Here’s my list:

The almond soap is as cracked as an old tooth.

He’s not circumcised. He looks like an Italian sculpture from a dream, a polychrome putto from the corner of a church. The tub is rotten, pink, with a sliding glass door that looks composed of a million thumbprints.

In the December rain, the buildings around the town square were the color of dirty fingernails.

On her hip, she balanced the little girl, who had a look of Victorian disapproval on her face. Even the girl’s dark hair looked annoyed and half-awake.

In the morning, they discovered that the interior walls were so thin they could hear, just behind the headboard, the noise of M. Petit emptying his bladder as clearly as if he’d been in the same room. It was a long story, the emptying of M. Petit’s bladder, with many digressions and false endings.

For me, the pleasure of the short story lies in these lovely instances of deft language and life, and in this collection such instances are everywhere. Elizabeth McCracken’s ear seems especially suited for the short form, in a tone that is always pitch perfect, and in the complex histories that run through every story.

was born in Jackson, Mississippi. Author of over forty short stories, five novels, three works of nonfiction, and one children’s book, she was awarded a Pulitzer Prize, a National Book Award and numerous O. Henry Awards, and was honored with a Presidential Medal of Freedom, a National Medal of Arts, the National Book Foundation Medal for Distinguished Contribution to American Letters, as well as being named a Chevalier de la Légion d’honneur by the French government. Her works captured the quintessential Southern voice with an emphasis on family and customs, with a strong sense of place. She died from natural causes in 2001; she was 92.