Once upon a time, the dystopian novel was edgy. When Europe was slowly recovering from the devastating effects of the Second World War and the whole of the Western world was drunk on the possibilities of “unlimited” energy, it took a special kind of visionary to look into the future and say, “We’re so doomed.”

Flash forward into the first years of the second decade of twenty-aughts and oh, how things have changed.

Dystopian novels are now in grave danger of becoming the Harlequin romances of the not-so-American century. The world is a bizarro-fiction where truth has become progressively stranger than the worst fears of the previous generation and we eat and breathe a fog of despair with the casual reluctance of an athlete at the Beijing Olympics.

This makes giving a fair review to a book like Ron Tanner’s Kiss Me, Stranger a difficult task. By what criteria do we engage a book that covers all the bases being covered by so many so ably? Tanner’s vision of everyone’s probable future enjoys a dreamlike quality that is produced by an amplification of the symbols he employs. The book’s main character, Penelope manically protects her thirteen children against the absurdist backdrop of a civilization beyond decline and well into the death throes of its own half-life. She is an echo of her Greek namesake, keeping the house fires burning (mostly by setting the doors and furniture on fire) while waiting for her husband, Marcel, to return from an ill-defined war in which her eldest son, Lon, is fighting on the opposite side.

Tanner goes to extraordinary lengths to keep Penelope as the center of the story, framing short excursions into her son’s experiences at war as dreams that she is having about him. It is an interesting device that slides admirably into the subtext of our awareness, creating a kind of patina of maternal concern as her son’s sense of right and wrong is eroded into alternating episodes of mindless boredom and equally mindless self-preservation.

Her husband’s struggle is left, in the manner of Greek theater, off-stage until the final chapter of the novel and, again, is presented to us, even as it intersects with events that are happening in the moment, in the language of dreams. While the allusion to The Odyssey is left subdued throughout the novel, it surfaces at all the right moments, reminding us that those times are always these times and war is and has always been the end of the world for someone every day.

Tanner’s world-building exercises feel less effective though it is possible that when building a novel where civilization has collapsed and continues collapsing, like a dwarf star, in upon itself, febrile attempts at sustaining culture are the point rather than the evidence of failure. Though the novel’s setting is left coyly ambiguous, the political atmosphere draws inspiration from any one of the Central Asian dictatorships as contextless chunks of Western culture are bound up into cults of personality. Dogs are memorialized in enormous statues as dead children are left in heaps on the side of what once was the road. The country itself is built upon the landfills of waste and those bits of useless culture become the treasures of tomorrow—tiny scraps of metal scavenged from the discarded plenty of yesterday represent the difference between starvation and one more day of survival. The transition from what was once normal to the place that the characters now find themselves is never clearly plotted, lost in a fog of nonlinear narrative that ambles between nostalgia and regret.

No doubt the most misunderstood component of Kiss Me, Stranger will be the many illustrations that accompany its text. They are not well-rendered in a traditional sense but do represent an important part of the story. As meaning has been broken down into its smallest units within the confines of the story, the absurdity of the drawings takes over at critical moments to provide a glimpse into this not-so-funhouse world in which the characters find themselves stranded. The drawings are not presented for interpretation but provide visceral and immediate moments for the reader to embrace the absurdity of that world. At times, they appear to represent how the world might appear to a child who has never known anything but the surreal uncertainty of this broken culture. Elsewhere, they stand as a testament to the spiraling breakdown of culture—a cruel mash-up of consumerist propaganda and unfiltered commentary on the disparity between what seems and what is. As memory and understanding slowly disintegrate under the whiplash pressures of a world gone mad, these stark images are all that remain available to the characters to try and make sense of the world in which they live. The goal is unreachable but, as it is the curse of the human mind to impose order where only chaos reigns, the illustrations transcend the crudeness of their own construction to embody the Penelope’s struggle to carve meaning from the sequence of mindless events that shape her life.

In the end, it is pointless to fault Ron Tanner, or anyone else for that matter, for succumbing to the temptation of peering into the near future and returning to us with only madness and a vague faith in the human impulse to survive. Kiss Me, Stranger isn’t the best or the most imaginative dystopian novel that I’ve ever read but it is smartly written, succinct and a sign of our regrettable times.

There is some part of me that is waiting for someone to sit down with a similar curiosity about the days to come who might use their imagination and writing acumen to construct a fiction that might bring us hope instead of confirm our fears. Perhaps we must wade for a time through the landfills of our culture before that vision can resonate in such a way as to light a more sensible path forward. Until then, we must resign ourselves to celebrating the courage with which authors like Tanner stare into the abyss that likely awaits us and steel ourselves for our transformation into the characters that haunt this novel. 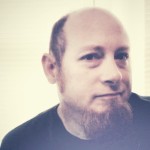 1 thought on “KISS ME, STRANGER by Ron Tanner”